ORLANDO, Fla. – Dec. 13, 2017 – The Florida Fan Fest, the ultimate celebration of soccer and entertainment, today announced that Sarasota natives, global rock sensations and 3 Peace Records recording artists Boyce Avenue will headline the Fan Fest at Universal Orlando Resort on Jan. 13. They will open the first night of the festival, which will also feature a live DJ and a party-like atmosphere for the whole family.

Fernando and Sorocaba, one of the leading names in Brazilian country music, and the Chris Weaver Band of Nashville, Tenn., will headline the second night of the Fan Fest on Jan. 14.

The Florida Cup Fan Fest will take place on Jan 13 and 14 starting at 8:00 p.m. at the Music Plaza Stage in Universal Studios Florida; and, it will be included with theme park admission.

“We couldn’t be more thrilled to have Boyce Avenue open the first night of our Fan Fest.,” said Florida Cup CEO Ricardo Villar. “The brothers represent the same inspirational spirit of the Florida Cup. We look forward to having them launch the celebration of music and soccer on January 13th.”

Named after the street where they grew up, Boyce Avenue is comprised of three Manzano brothers – Alejandro (lead vocals, guitar, piano), Fabian (guitar, vocals) and Daniel (bass, percussion, vocals). The Florida trio formed in 2004 and in 2007 they started posting videos on YouTube – clips that saw them performing both covers and originals. The videos resonated instantly with fans and have led Boyce Avenue to be the most viewed independent band in the world. To date, the band’s YouTube channel has amassed over 3.6 billion views and over 10 million subscribers, which ranks the band by subscribers above many leading artists. The band also has more than a half-million Twitter followers and over 3 million Facebook subscribers, forging a lasting and passionate digital fan base that have followed Boyce Avenue’s every move for years.

In 2011, Boyce Avenue launched their own label 3 Peace Records and continued to grow in popularity, receiving two nominations for the Teen Choice for Choice Web Star: Music in 2014 and 2016. Boyce Avenue were also featured as voice coaches on The X Factor in the U.S. in 2012. The group has headlined in over 25 different countries, sold over a half-million tickets worldwide and is the most streamed independent band on Spotify in the world.

The Florida Cup Fan Fest is included with admission to Universal Studios Florida. 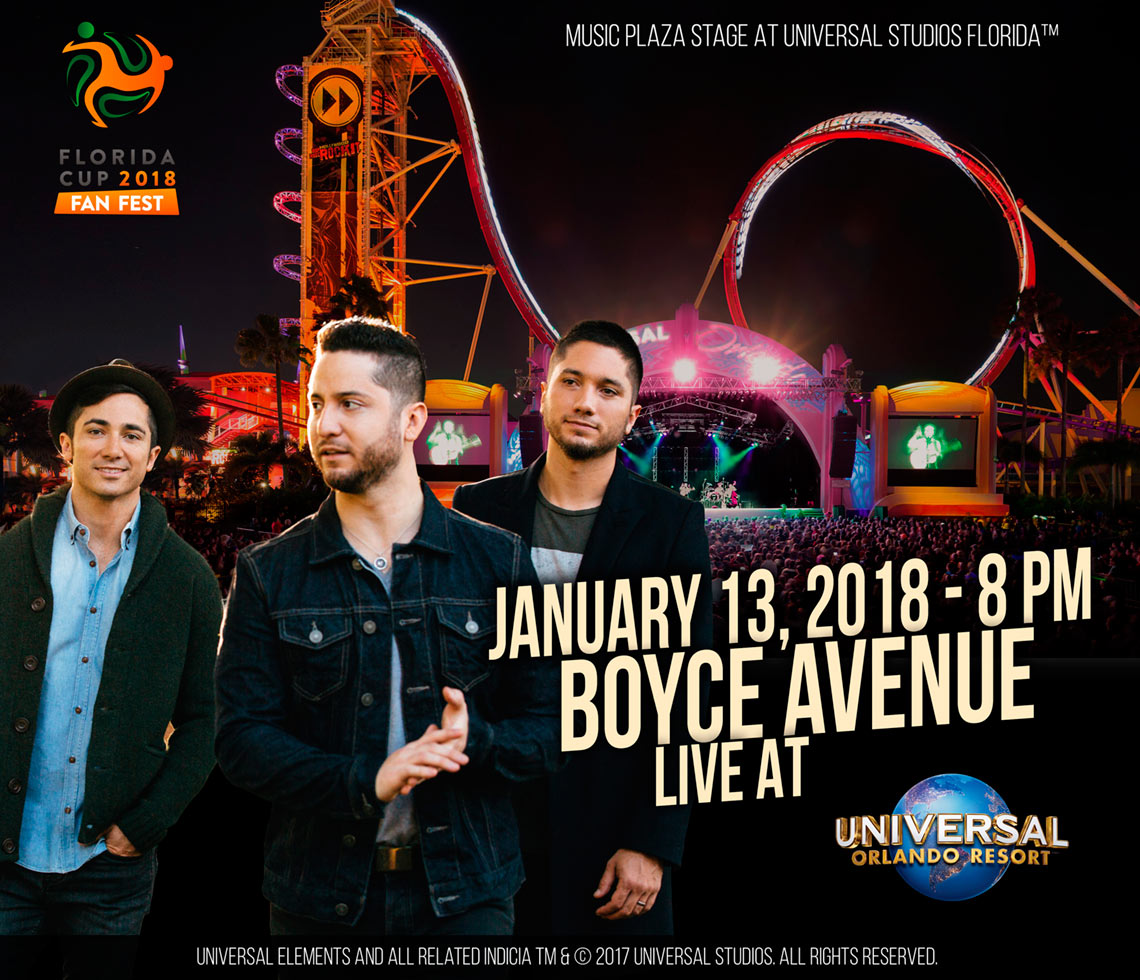 About The Florida Cup:

The Florida Cup is the largest international soccer celebration held annually in Florida. It is a global platform that combines sports and entertainment. Broadcast live in 2017 to over 140 countries, the tournament reached over 50 million viewers. Globally recognized soccer clubs from Europe and Latin America will convene in Central Florida for this premier event – a final tune-up before the start of their respective campaigns and the kickoff for a World Cup year. For more information on the Florida Cup including tickets, visit www.floridacup.com, or follow us on Facebook, Twitter and Instagram.

Universal Orlando Resort is a unique vacation destination that is part of the NBCUniversal Comcast family.  For more than 25 years, Universal Orlando has been creating epic vacations for the entire family – incredible experiences that place guests in the heart of powerful stories and adventures.